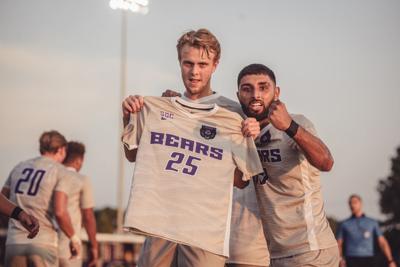 From the moment, Senior, Mathias Bendiksen, could walk, there was a soccer ball at his feet, but the first thing you notice about this soccer player is how big his heart is.

In a recent match against the Texas Rio Grande Valley, Bendiksen assisted a goal from midfield.

The victory that the team acquired was pushed with a feeling of support and love for their fellow teammate Jose Carlos Gonzalez, who had just recently lost his mother. As a gesture of love for his teammate, Bendiksen held up his jersey to a camera crew and the crowd.

You could say the skill on the field comes from the Bendiksen genepool. With a professional soccer player in the family, the stakes are high, but Bendiksen lives up to the standard.

“My dad [Yngvar Bendiksen] played soccer professionally in Norway,” Bendiksen said, “so me and my two other siblings grew up playing soccer every day, and me and my brother still play so I would say it is a big part of my family still.”

Aside from soccer, Bendiksen admitted to his love for teaching. His intention was to work within a school, but his major is not conducive to the desire.

“I actually wanted to study to become a teacher when I first got here,” Bendiksen said, “I have been working as a substitute teacher for a few years in Norway, but I was not able to use the degree in Norway so I went with my second option which was a business major.”

Mathias went on to say that teaching is not something he has forgotten about and plans to continue in education for a graduate degree in Norway.

Being that Norway is 4,458 miles away, the distance for someone so family oriented can be troubling.

However, this UCA Forward has found a love, not only for the game, but for the team.

“Some days it is hard to be away from home, Bendiksen stated. “Especially since Conway is so far away from where my family lives back home in Norway, but I have gotten a second family here at UCA with the soccer team and a lot of friends so that has helped me feeling more at home and made it easier to be away from home.”

Bendiksen has made the transition to living in Arkansas well, but anticipates the day his family will be able to step foot in purple bear territory.

He has had to utilize video calling softwares well before COVID-19 in order to communicate with his heroes and family for the last four years.

“My grandfather is my hero, he has always been there for me and have taught me so many things, and I am lucky to be able to still learn from him. When I moved to Arkansas I had to teach him how to use Facetime so we could still talk to each other every week,” Bendiksen said.

When Bendiksen is not on the field or in the classroom, he is playing Disc Golf or hiking; yet, this is a rare occasion when the team continues to push the limit each practice.

“I expect a great year and a fresh start with a new head coach,” Bendiksen said, “Everybody has been working really hard so far and it paid off in the season opener so we have to make sure we continue putting in our maximum effort and continuing to play well.”