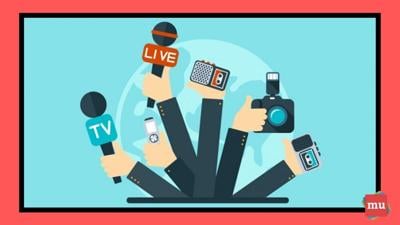 Before ranting on the media, one must have competency in what the media entails. The media covers a broad majority of things. Therefore, it is not solely one person spitting out false information.

The media comprises print news, broadcast news, social media, radio, online outlets and various other forms. The common misconception is that the media is just one massive outlet that is interconnected, sharing the same perspective and sharing the same information that many don't want to hear, see or read.

However, it is good to hear news that you don't like. This keeps you from being in an echo chamber.

Where the media can go wrong is when journalists portray their own bias in their writing. A struggle of being a journalist is suppressing one's own opinion and deterring it away from his writing.

True journalists cover every detail of the story, showing the truth on both sides of the spectrum, leaving no bias or perspective on the paper. It is merely up to the reader to form his own opinion on the topic.

Without good journalists, nations would be led astray by not knowing what is truly happening in their government, their economy and in their society. It is immensely important that true journalism be upheld in the world.

The day a journalist goes wrong is when they leave their own opinion in the publication. At this point, it is essentially an editorial piece; Not news. This is not true journalism. This concept lacks integrity and leads people astray from knowing the truth and forming their own views on matters.

Unfortunately, some media outlets neglect this aspect of journalism and have built their branding off of it.

Various media outlets are biased, but not all of them. This is the importance of being the reader; Knowing your sources.

Often are people swayed by biased media outlets and have taken on a sheep mentality. They merely follow what their favorite news outlet says, and don't form their own opinions on subjects.

It is vitally important to know where one gets his news so he can't be swayed by left-or-right-swinging news outlets. Plenty of news platforms can be found that are good and true; It just takes a little research.

Take the time to research good and accurate sources for information, not just random certified people on twitter. Know your journalists. Don't give in to biased media outlets. It is each person's right to know what is happening in the world, and nonetheless, the truth in the midst of it all.