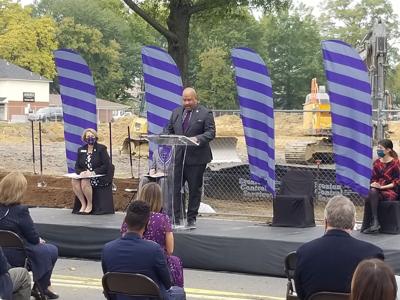 UCA Board of Trustees Chair Pastor Cornell Maltbia greets the crowd in front of the soon-to-be Windgate Center for Fine and Performing Arts on Friday, Oct. 9. As part of the groundbreaking ceremony, UCA acknowledged the Windgate Foundation for their $20 million dollar donation towards the construction of the facility.

President Houston Davis and the UCA Board of Trustees turned sod in front of where the Windgate Center for Fine and Performing Arts will be built on the corner of Bruce Street near Thompson Hall on Friday, Oct 11, to celebrate the $20 million dollar donation from the Windgate Foundation along with a new gift of $3 million dollars from the Alice L. Walton Foundation.

The Windgate Center, with a tentative opening date of Fall 2022, will provide almost 100,000 square feet of classroom, studio, rehearsal and performance spaces, furthering UCA’s stance as one of the top leaders in the state in the performing arts. The center will include a creative quad and sculpture garden, an art gallery, a black box theatre and a concert hall that will be the only one-room, open-concept venue in Central Arkansas.

The $3 million dollar donation from the Alice L. Walton Foundation will provide needed resources to help aid the construction of the Windgate Center, help establish an endowment for ongoing facility maintenance at the Windgate Center and help support art education programming at UCA.

“In January of 2019, UCA received the largest gift in our 113-year history, a $20 million dollar challenge gift from the Windgate Foundation to help build the Windgate Center for Fine and Performing Arts,” President Davis said. “That gift not only trumpeted the quality of faculty, our programs, our students and our alumni to the world, but it raised the bar for our institution and provided a pathway that led us to this great event.”

President Davis acknowledged that students also need financial support along with the new facility, stating that $1 million dollars of the $20 million dollar donation will go towards scholarships to those who need it.

Junior Julia Dabdub, majoring in philosophy and theatre, represented students of the arts and was recognized at the ceremony for being a Bridges-Larson Foundation Scholar.

“Acting allows me to experience life from the perspective of another person. Your character has to have a part of you or it’s not really your art, so I’m able to see myself in a different light,” Dabdub said. “Watching a performance gives people the time to stop and feel some emotion and I love being able to share this with audiences.”

Along with the donation from the Windgate Foundation, the Board of Trustees have also allocated state bonds to be used to fund construction of the Windgate Center. University Advancement, represented at the ceremony by interim Vice-President Dr. Mary Bane Lackie, will be responsible for raising the remaining funds needed to complete the construction of the center.

Donations are being accepted by the University’s Division of Advancement and if interested, contact Gunnar Bartlett at gbartlett1@uca.edu.

To play the media you will need to either update your browser to a recent version or update your Flash plugin.

The Latest from News6

Demonstrators debate on the steps of the Capitol

Various groups gathered outside of the Arkansas State Capitol on Saturday afternoon following the announcement of the President-elect Joe Biden.