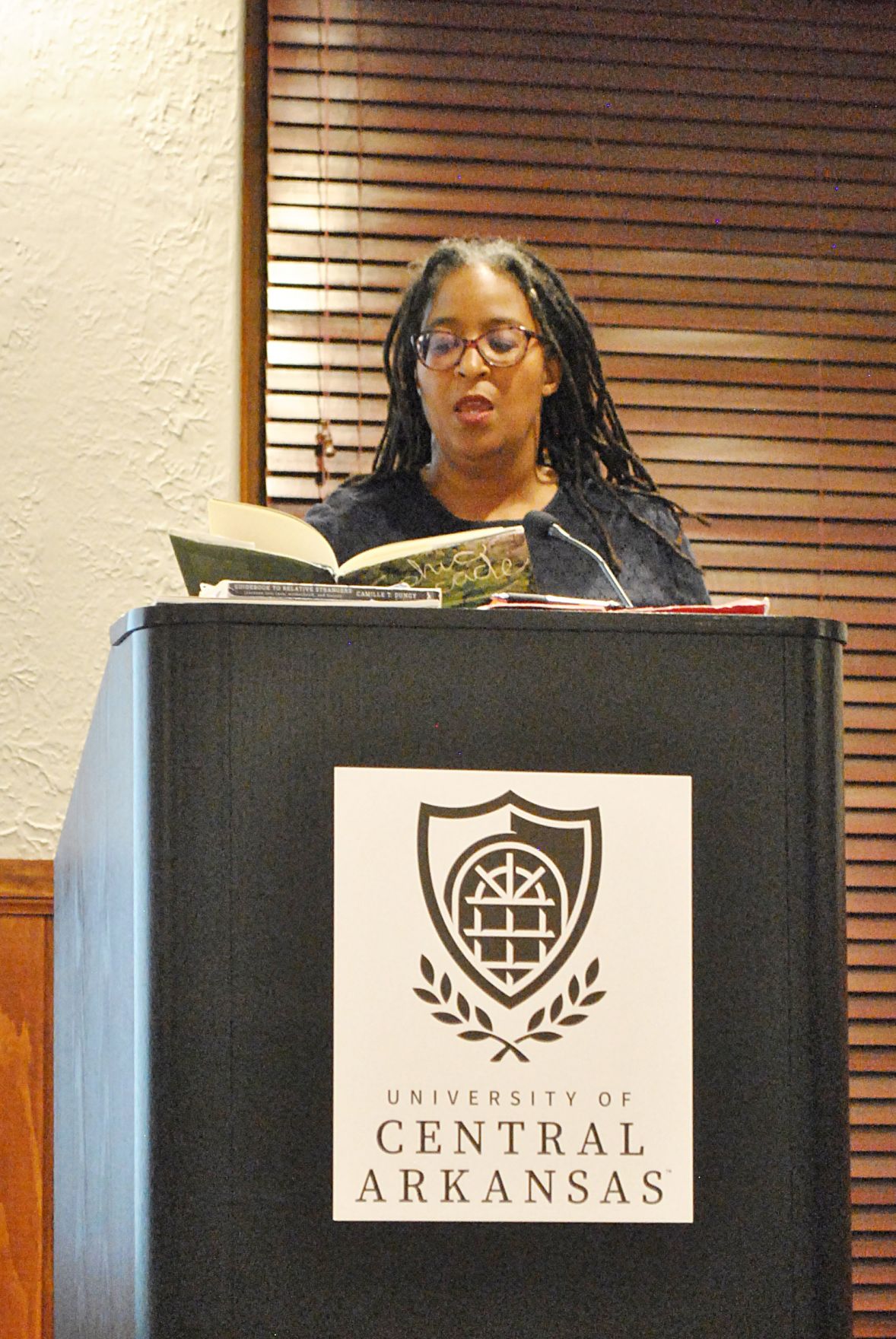 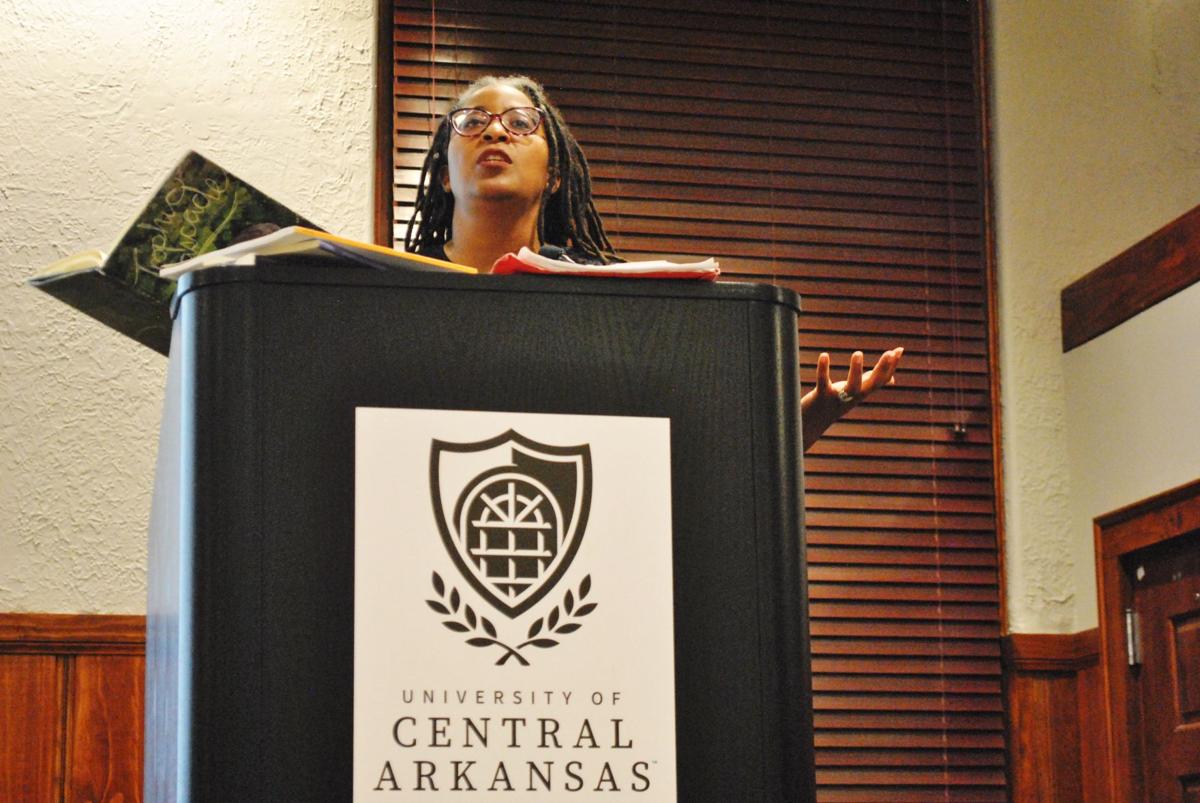 Dungy read  a poem she wrote after Wright’s 2016 passing. The poem is called "Oh My Dear Ones" and the final line is "We didn't know it would happen/this soon."

Dungy read  a poem she wrote after Wright’s 2016 passing. The poem is called "Oh My Dear Ones" and the final line is "We didn't know it would happen/this soon."

Camille T. Dungy, a 2019 Guggenheim Fellowship recipient and author of numerous books of poetry as well as a book of essays, provided humorous and moving insight into her work during her presentation in the McCastlain Hall Ballroom on the evening of Nov. 8 as the keynote reader of The C.D. Wright Women Writers Conference.

With the exception of the Pre-Conference Workshop and Editorial Consultations event that took place earlier in the day on Friday, Dungy’s keynote reading began the weekend-long conference, which is part of the University of Central Arkansas Foundation. The reading was free and open to the public and it was the only event of the weekend that did not require conference registration.

While the registration booth in the McCastlain foyer buzzed with conference attendees, others were finding their seats inside the ballroom and enjoying hors d'oeuvres provided by UCA Catering, as well as small glasses of wine.

Once on stage, Dungy said that she had been trying to attend the conference in the past, but kept running into time conflicts, so the invitation to give the keynote was exciting for her.

UCA Assistant Professor of Creative Writing, Jennie Case, was the one to introduce Dungy and reflected on the time she had first heard her speak, which was 10 years prior on her then college campus.

“I, like many of UCA’s undergraduates and MFA students in this room and perhaps even like some of our conference attendees, still found myself awestruck whenever I had a chance to sit in the same room as a pulished writer I admired — and I certainly did feel awestruck that night,” Case said. “Dungy was doing crucial, important work, yet she was also a generous mentor.”

Case said that during the Q&A that night at her college, Dungy talked about her need to include joy in “Suck on The Marrow”, a book of poetry by Dungy that explores the lives of African Americans in the 19th century, highlight the enslaved and emancipated black experiences that are often overlooked. It was published in 2010 and won an American Book Award.

The inclusion of joy was a matter of making sure that the lives of the people in the book weren’t only defined by slavery, violence, or racism and the theme of finding that joy lived on through many of the readings provided by Dungy at her keynote reading in the McCastlain Ballroom.

Dungy smiled, giggled and laughed between readings while explaining things like where her inspiration came from, remembering something about writing a certain piece, or reminiscing on the the development of a character or a poem.

“Sometimes there are changes and losses of who we are and what we know of the world that actually open up new doorways and new pathways,” Dungy said before a reading from an essay about her becoming a mother in her late 30s while also managing and furthering her career as a writer, speaker and teacher.

She also spoke about her connection to the state of Arkansas and her ancestors that had once lived here.

The audience remained engaged throughout the readings and afterward, many lined up to buy books from a booth in the foyer and have Dungy sign their copies.

Preceding her readings, the winners of the Nan Snow awards were announced. I’m working on getting the names of these winners.

Dungy’s debut collection of personal essays is “Guidebook to Relative Strangers: Journeys into Race, Motherhood, and History,” which was a finalist for the National Book Critics Circle Award. She has authored 4 books of poetry, most recently Trophic Cascade (Wesleyan UP, 2017), winner of the Colorado Book Award. Dungy can be found online at camilledungy.com.

The C.D. Wright Women Writers Conference is named in honor of C.D. Wright (1949–2016), one of America’s foremost poets. Among Wright’s many honors are a National Book Critics Circle Award, two National Endowment for the Arts fellowships, a MacArthur Fellowship and a Guggenheim Foundation Fellowship.

“Our goal is to provide a space for camaraderie, connection-making, and inspiration, and while women-identifying writers are the only presenters at the conference, we welcome all of our male and male-identifying colleagues to attend,” according to the conference website.

Sorry, there are no recent results for popular videos.

Sorry, there are no recent results for popular commented articles.