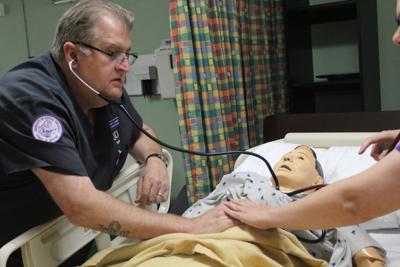 “I was in [the] Air Force for 25 years and then I became a safety inspector for civilian life,” Cavender said.

Cavender then decided to leave behind his safety inspection job for a degree in nursing after experiencing the death of his first wife of 34 years from cancer. During his wife’s time on hospice, Cavender credits the nurses who worked with his family as being a light during their dark time.

“Those nurses really saved us in a big way. Everything went the way it should of when someone dies. At my age of 52, having my wife die — it was hugely traumatic  — [but] I made it. I absolutely credit the nurses, so I want to pay it forward what they did for me.”

After receiving the blessing to study at UCA from his current wife, Cavender set out on his newest adventure and hopes that his story will prove to everyone that it’s never too late to follow your passion.

The UCA nursing department happen to choose him as a student to highlight on their Facebook page — not knowing that it would go viral overnight; recieving over 900 likes and being shared all over the country.

But being an older student, Cavender wants other, younger students to understand that his time is just as valuable.

“I try to be a student first. I’ve seen other people — non-traditionals who are my age and older — try to be dad or even granddads [figures] instead of students and classmates. You turn people off trying to be their dad — I’m not your dad. Just because I’m 56 doesn’t mean I’m your boss,” Cavender said jokingly.

With a nursing degree, Cavender hopes to someday teach nursing himself.

“I hope to come back to graduate school and eventually end up teaching [but] of course, I have to get in several years of practice in first.”

During the interview, Cavender mentioned that he hopes to someday work at the Conway Regional hospital — the exact hospital he was born at in 1963.

“I was one of the first babies born in the second interration of [the former] Conway Memorial hospital. I think it would be cool as the dickens to be working in the hospital I was born in. The part of the building I was born in is not a maternity ward anymore, but it’s still there.”

To Cavender, age is just a number and he hopes that others think so as well.

“I’m driven. This wasn’t just a ‘hmm, I want to be a nurse’. This was an emotional, passionate decision to do what was done for me. Just me being here [at UCA] has already have some good come about and [I hope to] bring more good about through this — not letting my wife’s death define my future.”

For other students, those non-traditional and alike, Cavender gave some words of encouragement.

“It’s never too late. You gotta follow your dreams. If you really want it, come get it. That’s what I’m doing.”

Sorry, there are no recent results for popular videos.

Sorry, there are no recent results for popular commented articles.