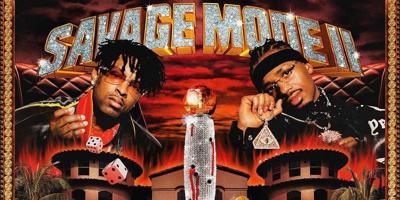 The infamous duo, rapper 21 Savage and producer Metro Boomin, have teamed up once again and released the highly anticipated album “Savage Mode II”.

The duo released their first project together titled “Savage Mode” in the summer of 2016. “Savage Mode” went on to be a staple in the hip-hop community and introduced the Atlanta rapper to a wider audience, helping him transition to mainstream hip-hop.

Now four years later, with the two both at the height of their career, they have collaborated to make another masterpiece. It is hard to make a good sequel but “Savage Mode II” defies the odds and brings the franchise to another level. The album starts off with an intro narrated by the legendary actor Morgan Freeman. Freeman is heard all throughout the album telling the story of the seemingly villianish story.

The album gives you all the heavy and gritty trap-like beats that you loved in “Savage Mode II”. It is prevalent in tracks like “Runnin”, “Glock in My Lap” , and “Slidin”. “Runnin” being the opening song of the album hits hard with its heavy bass, 808’s and solid bars from 21. It’s enough to get your adrenaline going to power through the rest of the album.

“Glock In My Lap” is arguably one of the best songs on the album. 21 is in his element as he raps about violence, street life, and guns, reminding his audience of the life he came from. Besides the sublime production, the chorus is what makes this song a hit. He alludes that he is really about the lyrics he raps about, opposed to other rappers when he says “Most these rappers cap, I ain’t giving dap”. He confirms his menace like behavior even more with the lines “You pray on your knees, I pray to my strap.”

“Mr. Right Now” sticks out from all the other songs in the album as it is a bit more pop-like. But when it’s a song featuring Drake what do you expect? Drake delivers note-worthy bars as expected and adds even more attention with a scandalous name drop. It’s a catchy radio record for sure, but it's still a decent song.

Another song that stands out from the others is “Steppin on N*****”. However, this song takes an interesting route from the duo. Metro uses an interpolate from the iconic “Boyz-n-the Hood” by Eazy-E, paying tribute to early 1980’s rap. 21 pays tribute as well using a similar flow to the rappers of that time. This was intriguing for sure and the duo executed it perfectly.

The duo slows things down with “Rich N**** Shit”. This is one of my personal favorites. Metro lays out a smooth hypnotic beat with a few cowbells thrown in there to give it that perfect finish. 21 uses this song for more braggadocious rap, telling about the lavish life he lives due to his newfound wealth. Young Thug added to the track more with his effortless verse.

21 showcases his clever punchlines and versatile flow throughout the album but they are more prevalent in songs like “Runnin” “Many Men” and “My Dawg”. The most note-worthy line on the album is on the song “My Dawg” when he addresses rumors that circulated last year about being from the United Kingdom. “N***** keep talking that UK shit like I ain’t got AKs.” The line was a brilliant way to confirm the rumors while still maintaining his status as someone who was formerly from the streets. He gets more vulnerable on this song as he tells about lost friends, moving from London to East Atlanta and growing up in the street life. Similarly in “RIP Luv”, Savage opens up rapping about heartbreak and pain that he holds onto inside.

Although this was a sequel to a previous project, it doesn’t feel fair to compare the two. Both projects produced timeless bangers and were executed very well. However, I feel like they are both in their own lane. “Savage Mode” was an EP to showcase the duo's talents and to give the world a taste of what 21 was all about. “Savage Mode II” is an album that not only displays the duo’s skills but also experimented with new sounds and gave more introspection. All in all, 21 Savage and Metro Boomin created an impressive album that has a great amount of replay value.